A More Political Alliance – Force of arms are not the only tools transforming NATO’s battlefield. 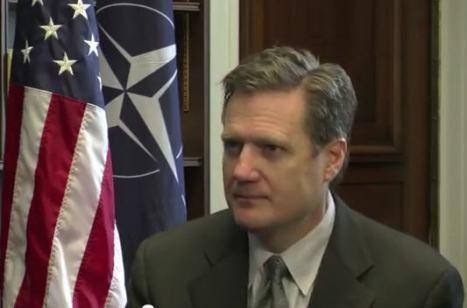 Headlines wouldn’t suggest it, but protestors and pundits were on common ground during the NATO Summit concluded last month in Chicago. Street demonstrators attacked the alliance for drone strikes while policy critics debated burden-sharing in an era of austerity, yet both agreed on one thing: NATO’s primary tool for dealing with threats and challenges today is primarily force of arms.

But hard power, to borrow a tired phrase, is not the totality of NATO’s character. NATO remains unique for its collective defense provision, but its political aspect is too-often overlooked.  And it is the political NATO that has done far more to spread peace, trust and security across Europe and beyond than through force.

The political NATO is defined not by the military operations and capacities of the Alliance, but rather by the ability to negotiate, consult, and reconcile with friends and, where possible and appropriate, also with adversaries.  This remarkable ability is recounted again and again by NATO member ambassadors to the United States in an interview project the Center for Transatlantic Security Studies at National Defense University produced for the NATO Summit, “A More Perfect Alliance”, which can be viewed online.

NATO’s ability to reconcile goes back surprisingly far, even to the time of the Cold War.  During the mid-1980s, the NATO states negotiated with the Warsaw Pact and the Soviet Union through the Conference on Security and Cooperation in Europe  and also concluded the Treaty on Conventional Forces in Europe (CFE). The former helped to promote the end of the Cold War.  The latter landmark arms control framework still limits the means to make war on the European continent.

Peter Taksøe-Jensen, the Danish ambassador to the United States, participated in the CFE negotiations and saw how the two sides, NATO and the Warsaw Pact, came together to build the future.  “We saw the Warsaw pact falling apart during negotiations,” he told us, “but we managed to nail a negotiation and a result that… helped in shaping the Europe we know today.”

NATO similarly engaged in high-stakes trading during the waning days of the Cold War as the United States and the Soviet Union wrote the breakthrough treaty on intermediate nuclear forces in Europe. Member states negotiated among themselves in a little-known process to reduce tactical nuclear weapons in Europe by more than 90 percent.  Claudio Bisogniero, the Italian Ambassador to the United States and former NATO Deputy Secretary General, recalled his service at NATO in the late 1980s as an exciting time of remarkable change. “We signed a treaty or memorandum at NATO once a month … with the Russians or among us allies,” he told us.

Today NATO is often accused of aggravating tensions with its former adversary.  Less understood is how NATO has helped ease and reconcile relations between its member states and Russia.  The Latvian ambassador to the United States, Andrejs Pildegovics, remarked on how his country has improved relations with its great neighbor. “Since we have joined NATO, the climate in the region has improved dramatically,” he told us. “This is due to the fact that the borders are clear, the structures are there, and there are no temptations for any changes.”

NATO’s ability to reconcile former adversaries is not limited to the ties between former Soviet republics.  Croatia joined NATO in 2009, barely 15 years after the wars of succession in the former Yugoslavia.  Today with Slovenia, Croatia champions expanded NATO membership in the Balkans to include its former warring neighbors.  Joško Paro, the Croatian Ambassador to the United States, explained why.  “We believe if our neighbors join us in NATO,” he told us, “then our neighborhood is going to be better.”

NATO’s political power is significant now because it may be the final way out of Afghanistan, the Chicago Summit’s signature issue.  Special forces, drone strikes and the persistent effort of allied soldiers have greatly diminished the Taliban and affiliated groups.  But counterinsurgency doctrine suggests the lasting way to break the back of an insurgency is to co-opt reconcilable elements through a political process.  As the allies committed themselves to the future of Afghanistan for their own security, they assumed responsibility to end the insurgency by force or by politics.  Thankfully they have the experience and means to do it.

NATO has been critical to resolving long-standing disputes with old adversaries and new.  Whether ending the Cold War and expanding the area of peace and stability in Europe or dismantling the Taliban, NATO has more than just weapons in its toolkit.  Not only through force of arms but through the political power of democratic states acting in concert will NATO continue to resolve the threats that challenge us, in Afghanistan and beyond.

James Snyder served on NATO’s International Staff in Brussels from 2005 to 2011. Brett Swaney is a research assistant in the Center for Transatlantic Security Studies at the National Defense University, Washington, D.C.

One response to “A More Political Alliance – Force of arms are not the only tools transforming NATO’s battlefield.”